Brooks was in the bathtub last week, and here’s what I overheard: “You don’t have to be worried, cow. Your friends are here. Look: pig is here, horse is here, duck is here. If you cry, someone will give you hug. See? Horse wants to give you a hug. Mmmmm. There. Don’t you feel better?”

In the old days, presented with a set of animal bath toys, Brooks would repetitively pour water over them.

Not only is Brooks finally delving into imaginary play, he’s showing me what a warm and nurturing place his kindergarten classroom is. Of course, this confirms what we already knew from meetings with the teachers and therapists, and it is also firmly on display whenever I pick him up or drop him off. I love watching Brooks experience such tender interactions with his new grown-up friends. Although it wouldn’t be fair to credit the school alone with this developmental leap in imaginary play (we’ve been working on it since Brooks was 18-months-old), the program is certainly living up to our expectations. For example: 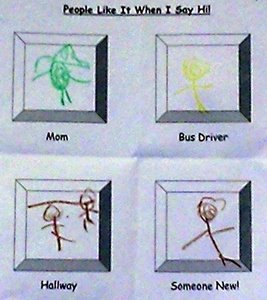 Brooks came home last week with a worksheet entitled “People like it when I say hi!” with hand-drawn pictures of mom, a bus driver, a hallway, and someone new. This apparently simple worksheet not only encompasses the social greeting component, but also fine-motor drawing skills, and reading practice. I think it’s emblematic of the efficiency of their multi-disciplinary approach. (It’s also nice to see that Brooks is finally drawing stick figures with legs that don’t come out of their heads.)

Any concerns that we had back in September about a small, potentially restrictive self-contained special ed class have pretty much melted away. Brooks is making regular short visits to the integrated Nest class these days, and if he continues to progress, he may move into the integrated model next year. We also worried that all this concentration on social issues might shortchange academics; no more. Many weekend mornings, he sits at the computer and Googles “dvd,” “toys,” “max and ruby,” clicks on the search results, and calls me over: “Look, Mommy. I added something to the cart!” He once got to a Craig’s List ad for a new car (maybe from a search on the movie “Cars”?). Once he figures out credit card numbers, we’re in trouble. In the meantime, he’s doing just fine.

The teaching units in the classroom are chosen as carefully as everything else, and the current one encompasses “dealing with change,” a big challenge for Brooks and his five classmates. In an attempt to put at least a dent into their over-reliance on schedules and routines, these kids are learning that’s it’s okay to “switch things up.” As a part of that, his teachers are trying to encourage Brooks to take more risks, instead of responding with his usual automatic “no” when asked to participate in certain classroom activities.

Last week, Brooks told me I should come to school because “it’s fun and they have centers and snack.” So I told him that I didn’t think they would let me come to school, because I’m a grown-up, and he paused and said: “Mommy, you need to take a chance!”

Author’s Note: I learned recently that the Intensive K program that Brooks attends is not technically part of the ASD Nest program, although it does feed into it. It is separately funded. I apologize for any confusion.