PS 178 arrest: When a bad thing happens at a good school 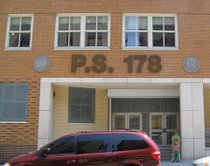 When I heard the disturbing news yesterday that a teacher’s aide at Brooks’s school had been arrested for child molestation, my neurotic parental instincts kicked in: how did anyone ever talk me into letting my innocent son venture out into this dangerous world?

But since I also understand that locking him inside our two-bedroom apartment is not a feasible solution, I have been trying to settle my queasy stomach and find a middle ground. There is no escaping the harsh reality of this incident nor its complexities, especially in terms of how schools should behave in its wake. But this morning, when the principal, Dede Budd, invited parents to a meeting to hammer out these issues, I was comforted — as much as any parent in these exceptional circumstances can be comforted, that is.

Ms. Budd began by presenting the facts and correcting misinformation. Mr. Benitez had been a paraprofessional at the school for eight years. On the day of the incident, the two teachers in his classroom were absent, so there were two subs. Those subs, who had worked at the school before, witnessed the “inappropriate touching” and immediately reported it. Mr. Benitez was quickly removed from the classroom, and the children’s parents were called, as was the police. According to Dede, none of the children, including the ones directly involved, were traumatized or even aware of what had transpired. Mr. Benitez was never allowed back into the classroom after the incident. To Dede’s dismay, she was not able to share any of this information with parents since it was initially classified as confidential. It is only now, after the arrest, that she is finally able to speak.

There was talk of providing resources to parents to help them talk to their kids without alarming them, which most parents found challenging. There was also talk of strategies within the classrooms regarding how to address Mr. Benitez’s sudden departure and about more general “what’s appropriate and what’s not?” issues. Dede assured us the teachers have had long and substantive discussions about the best way to deal with the students’ questions and concerns.

The meeting concluded with the parents’ general agreement that the school administration behaved impeccably. They were as distressed by this incident as we were, and their priority is and always has been to create a safe environment for our children. Even the representative sent by the Department of Education expressed genuine concern: he listened closely to all of us, he acknowledged the fine balancing act of protecting children without trouncing on teachers’ rights, and he provided answers that were thoughtful, smart and heartfelt.

Parents were clearly dismayed to hear of the arrest first from the media, rather than the school, and there was a discussion about how to better tackle that complex issue. There must be some way to prevent your first-grader from learning that his teacher was arrested from another child’s chatter on the school bus.

Of course, I am still troubled, especially by an anonymous parent in a TV news report who insists that she knew this was coming because her daughter had complained about Mr. Benitez back in 2006. During the meeting, Dede clarified that accusations in prior years had been unfounded. But all agreed that “unfounded” means unproven — not necessarily untrue. Given the current situation, it’s certainly looking more and more like the “unfounded” charges were, in fact, true.

Thankfully, Brooks didn’t know Mr. Benitez, so he is largely unaware of these unsettling events. Along with many of his peers, my son is celebrating the end of his school year and the start of summer vacation. But Mr. Benitez’s former students don’t have that luxury: a man they trusted has suddenly been arrested.

I wouldn’t know how to begin to explain to a first grader what I’m having trouble grappling with myself as an adult, but I’m confident that the extraordinary staff at PS 178 will somehow figure it out.