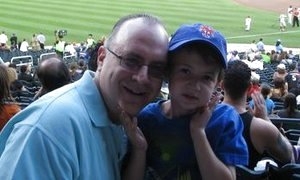 The gods of autism have smiled on us this summer: Brooks’s latest obsession is baseball.

No more Phineas and Ferb or Spongebob cartoons in the morning — only the replay of last night’s Mets game will do. He knows the teams, the lineups, the batting orders, and he often paces back and forth in his overstimulated way and tells me: “Angel Pagan did a diving catch and got an out at first base, but that was only the second out and if they get one more out then they switch sides and the Mets can get up and hit singles or doubles or triples or maybe a sacrifice fly…” and he will happily go on and on unless I redirect him.

This age-appropriate interest is a gift that we’re milking for all its worth. It’s making him a better athlete because he’s willing to practice running the bases for hours, it’s fostering conversations with other kids about their favorite players and teams, and he’s actually learning many of the basic rules of the game (although he still occasionally comes out with: “He tried to dunk the runners over” or “One more out and it’s a grand slam!”) Regardless, his unbridled enthusiasm for the sport is not going anywhere anytime soon.

It is especially poignant for me to watch my husband share his childhood sports team with our son. Until now, Brooks has been averse to the idea of “having a catch” and showed zero interest in these stereotypical father/son activities. These days, when they’re not out in the park, they’re on the couch shooting the breeze about Jose Reyes, stolen bases, and double plays.

Our biggest challenge is protecting Brooks from the lure of the Yankees—let’s face it, when you’re seven years old you care less about family history and more about a winning team!

Last night, Brooks found a football game on TV and asked me: “How many outs are there in this game?” I smiled and told him to go ask Daddy.