The two faces of autism 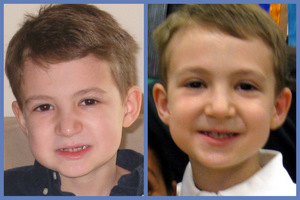 Although Brooks is an only child, I sometimes feel as if I’m raising two separate boys: the happy-go-lucky one on the right who exudes charm and intelligence, and the anxious, uncertain one on the left who is doggedly pursued by the challenges of autism.

For better or worse, my obsessive worrier isn’t around a lot at home, as he’s buying up a lot of real estate in first grade and has been steadfastly refusing to give up that turf.

So our parent-teacher conferences, which had been walks in the park for the past few years, have suddenly reverted back to the tone of his pre-K ones: he’s below grade level across the board.

He’s below grade level across the board? And it gets worse: his anxiety at school is very high. Something as simple as the introduction of a new topic in math can reduce him to tears. The same Brooks who last year at a kindergarten school trip voluntarily raised his hand to answer a MOMA tour guide’s question in front of all his peers is suddenly terrified of answering a question in his first grade class for fear of getting it wrong. Although he’s using the strategies he’s been taught to get himself through the day, that is all he’s doing: getting through the day. Not participating, not socializing, not learning; at least not when it comes to academics.

I’d like to be able to boast that this time around, my husband and I skipped the shell-shocked stage where we walk around feeling lousy and depressed. Unfortunately, we haven’t yet learned how to bypass that particular type of pain. During that week, my goals were not to cry on the subway or at work, and to look at Brooks and see him as something more than a collection of his deficits.

What I can boast about is that we bounced back quickly: we worked with Brooks’s ASD (autism spectrum disorder) Nest team on immediate strategies to lessen his anxiety, which we all agree is the number-one concern. And we’ve scheduled a full psycho-educational evaluation to get a better idea of his cognitive abilities so that we can tease out what he’s really struggling with academically from pure anxiety issues.

No matter how hard my husband and I work to build our son’s self-esteem, Brooks believes, and it seems to us has always believed, that unless he understands everything and has all the right answers, he is somehow less than. A tall order, especially for a boy with autism.

So it is with broken hearts that we watch him struggle, but with hope that we continue to bombard him with new and improved ways to be the sweet, enthusiastic, smiling boy: the one on the right.