My niece, Lindsay, married her longtime boyfriend, Colin, this summer on a warm evening in a storybook outdoor wedding.

This was easily the highlight of our annual Winnipeg pilgrimage, and Brooks celebrated by tearing up the dance floor while sporting his first-ever tie.

Although I too enjoyed the live band, my memories are quieter: the vintage table setting display where guests’ names were painted in white script onto weathered window panes by the father of the bride; my dad’s “wedding tie” hanging over his photograph, the one he wore to each of me and my three sister’s weddings; and then there were the speeches, each one as eloquent and heartfelt as the one that preceded it. 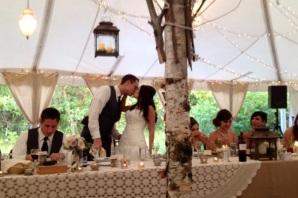 The best man, Colin’s brother, got choked up when he spoke about how he knew he was going to recover from an unexpected surgical procedure only when, still groggy from the anesthetic, he saw Colin standing at his bedside in the army reserve uniform he had rushed home in: “I knew I was safe. Big brother.” Lindsay’s dad thanked my sister–somehow they love each other with no less passion than they had in high school when a late night bonfire conversation sparked the start of their relationship. My sister admitted that she had no advice for the new couple because they’re  already doing all the right things: case in point, the bridesmaids and groomsmen were all closely-held family and friends that the newlyweds value and nurture as they do one another. And Lindsay herself, choking back a sob, thanked her parents for “everything you did for me that led me to him.”

My talented filmmaker nephew, Kai, then moved everyone from tears to laughter with a video about his new brother-in-law that combined baby picture cut-outs, interrogations, and time travel. 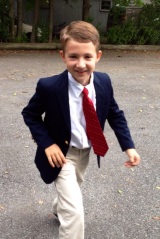 Brooks sat quietly through it all, and given his auditory processing challenges, I don’t know how much of it he got, a least on a cognitive level. But I do know he gets this: that those who had gathered that night,  dressed to the nines under candle lanterns hanging from tree branches, are his family.

They all know about my son’s autism, and I don’t ever regret having made the decision to be open about it early on. They love and accept him exactly as he is.

During the cocktail hour, cousin Miriam whisked him away to a nearby gift shop and returned him smiling ear to ear with a new paddle ball set. Then Uncle Kevin passed on hors d’oeuvres to help Brooks break in the new game. And after dinner, when he wasn’t dancing (the boy loves to dance!), he was hanging out with his cousins and his aunts and, of course, my mom (his “baba”)–they are insanely crazy about each other. My mom has that same oversized relationship with each of her seven grandchildren, and it is quite beautiful to watch.

Unless there is a winning lottery ticket in our future, Brooks won’t ever have a trust fund. But he’ll always have this remarkable family. And do I appreciate how valuable that is? I do.